ISLAMABAD – While strongly condemning the killing of foreign tourists at the Nanga Parbat base camp in a shout-out by attackers, Advisor to Chairman Pakistan Tehrik-e-Insaaf for Foreign Political Parties, Dr. Shahzad Waseem has said that this gory incident is part of the conspiracy to disrupt the relations with friendly countries and to destroy the tourism industry of Pakistan. However, he said that Pakistan and its people would not bow before the militant elements and foil their evil designs.

“At this critical stage when Pakistan is confronted with multiple crises especially law and order, energy shortfall, subsequent shattered economy and gloomy foreign investments, the killing of foreign tourists who included Chinese and Ukrainians would further aggravate the perception of Pakistan as an unsafe volatile place.” said Dr. Shahzad while talking to media here on Monday.

He said that the government should enforce stern security measures against terrorists who are striking at their will with impunity. It also needs to depoliticize police, enhance coordination between intelligence agencies and to use best possible means and tools to curb terrorist activities. This is time to act in unison and evolve national policy against terrorism.

The PTI leader expressed solidarity with the Chinese, Ukrainian and Russian governments and deepest sorrow and condolences with the bereaved families.

With specific reference to the Pak-China strong friendship, Dr. Shahzad said that China is a time-tested strategic friend of Pakistan and our common enemies will never succeed in their ulterior motives by such coward acts of terrorism. He urged the government to use all available resources to arrest the Nanga Parbat attackers so that the writ of law and state is established. 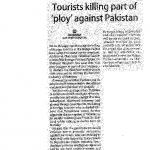