Talking to representatives of PTI belonging to different union councils (UCs) of the Capital who met him here at his office on Tuesday, Dr Shahzad Waseem said that his party hails the Lahore High Court’s (LHC) decision regarding holding election on party basis. The delegation comprised PTI representatives Sajid Malik, Mubbashir Abbasi, Sabtain Satti, Wajahat Bukhari, Raja Babar and others.

He was of the view that ruling Pakistan Muslim League (PML-N) fears defeat in LG polls that is why it was insisting non-party basis LG election in Islamabad.

The advisor to chairman PTI said that holding LB polls on non-party basis is violation of the basic human rights described in the Article 17(2) of the Constitution of Pakistan which at least should not be allowed at any cost.

He said that youth belonging to PTI and supporters of the party through their acts and deeds will prove that PTI is stronghold and major political force of the Capital and it will not let anybody to violate their rights.

Dr Shahzad Waseem said that PTI is not only serving the masses in Khyber Pakhtuhkhwa (KP) the province led by party or the people of constituencies where its representatives were in power but instead it raise voice for the basic rights of countrymen without discrimination of political affiliation, area or any other interest.

He said that one of the major aspect of emergence of PTI as a leading political force of the country was support of youth which comprise a major population of the country and commitment of the party to resolve the problems faced by people and country.

He vowed that PTI while continued its political role to resolve the internal issues and international issues confronting the national sovereignty and stability of the country due to which masses also have to suffer.

The PTI representatives hailing from different UCs of the federal capital expressed their complete confidence in party’s leadership and assured the party leader of complete support in upcoming LG election and to spare no efforts in this regard. 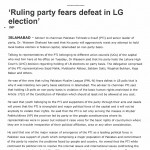 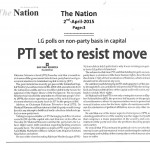 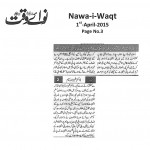 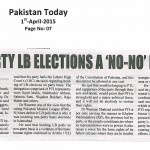