ISLAMABAD:  Senior leader of Pakistan Tehreek-e-Insaf (PTI) and former Senator, Dr. Shahzad Waseem has said that India stubbornness and aggressive designs are serious threat for the regional peace and imbalance of power.

He expressed these views while speaking during a dinner hosted in honour of British Secretary of State for Foreign Affairs and Common Wealth, Tobias Ellwood, organized by High Commissioner of UK in Pakistan, Phillips Barton.

Dr. Shahzad Waseem urged the global powers to take the notice of seize fire violation by Indian Border Security Forces (BSF) at Line of Control (LoC) and working boundary which often results in loss of precious and innocent lives.

He clarified that India should realize the fact that armed forces of Pakistan are capable enough to deal with any sort of aggressiveness and tackle the challenges faced by the country and its people.

The PTI leader lauded the actions taken by security forces of Pakistan against the terrorism during the recent weeks in which several terrorists were killed while various others were detained. He said that entire nation is standing at the back of their security forces in the ongoing war against terrorism and fresh actions have also come with positive aspects for security situation across the country.

Dr. Shahzad Waseem said that under the competent leadership of its chairman, the PTI is making all out efforts for implementation of democratic reforms.

Dr. Shahzad Waseem said struggle of PTI has created awareness among the people of the country to raise voice for their due rights. 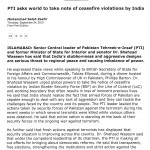 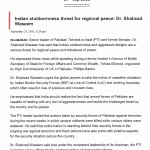 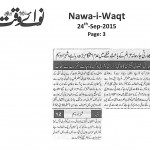 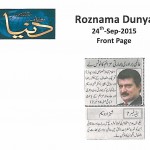 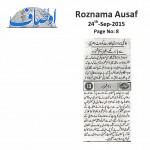 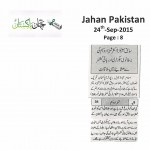