Dr Shahzad promises to take all initiatives for accomplishment of Imran’s mission.

While addressing the party workers meeting the PTI leader said that: “we will take all initiatives for the accomplishment of our party chairman Imran Khan’s mission which is not less than establishment of a reformed Pakistan, and make all-out efforts for the success of the party candidate for NA-48 Islamabad”.

The PTI leader urged the party workers and activists to effectively run the election campaign for Asad Umer’s big victory, as was done for Javed Hashmi in the same constituency during the last general elections.

Pakistan Tehreek-e-Insaaf Islamabad chapter has reiterated to gather full support in favor of the party candidate Asad Umer in NA-48 by-elections saying the residents of the city would once again repose their full confidence in the party’s candidate in the upcoming by polls. 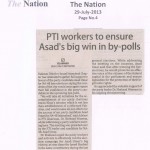 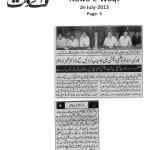